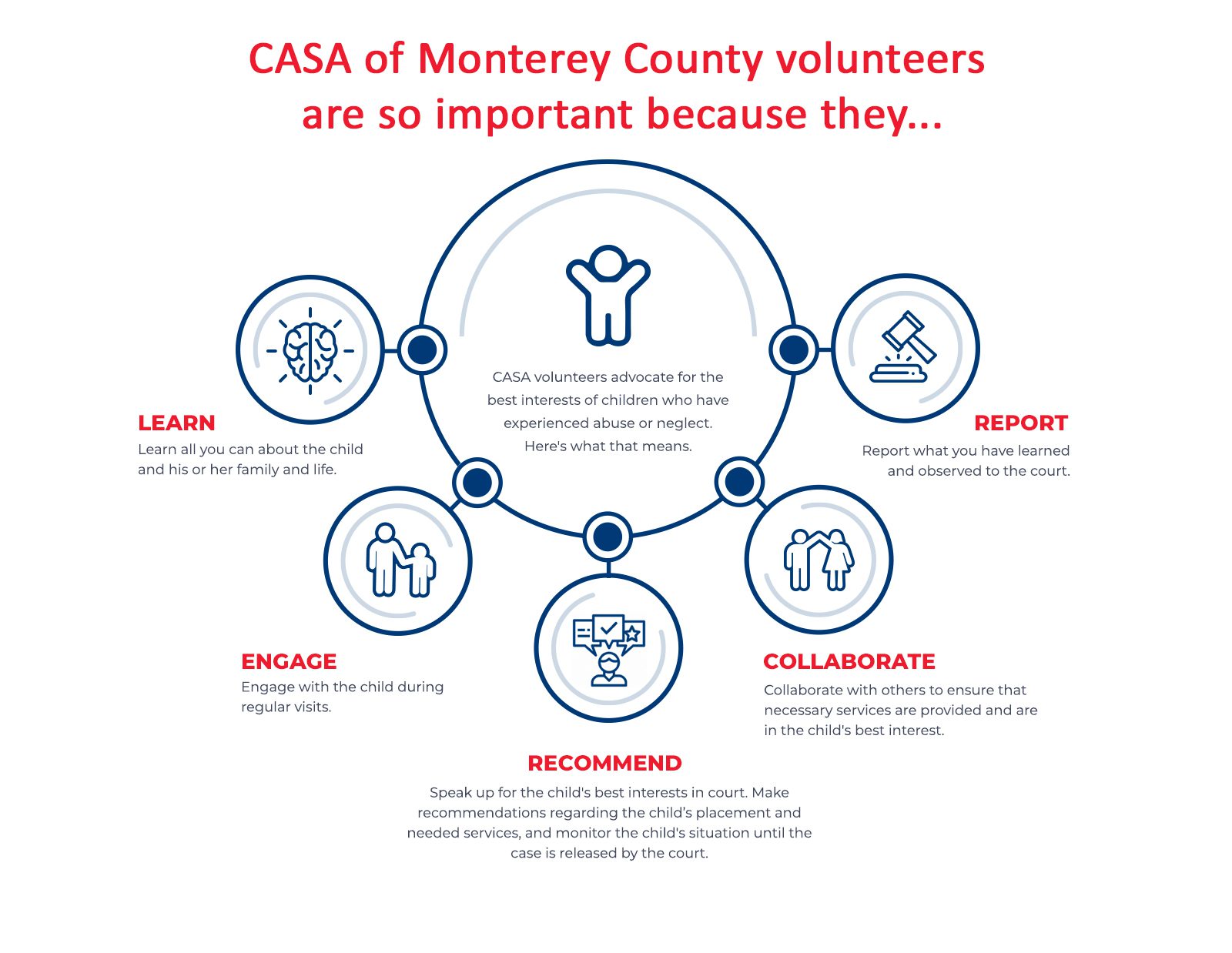 To quote Tom Brokaw, “It’s easy to make a buck. It’s a lot tougher to make a difference.”

Throughout my 30-year career as an English teacher, I have striven to make a small but significant difference in my students’ lives.  Since retiring, I looked for a long time for an ideal volunteer opportunity.

I have 3 young grandchildren who live in California, but not close by.
I also have my mother in San Diego who is seriously ill.
It’s important to me to be available to them. That’s why being a CASA volunteer works out great; the time I commit to my CASA obligation is time that I schedule myself.

After 5 weeks of training–which I looked forward to each session–I officially became a CASA on August 28, 2018. Choosing my foster child wasn’t easy; there are so many kids out there who need us, and their cases are often urgent and heartbreaking. But the one I selected from a stack of case files spoke to me, and we’ve developed a special relationship.

Even though I feel confident in my CASA role, there have been a few times when I’ve been frustrated due to situations beyond my control. For example, after forming a cordial bond with my CASA kid’s foster family, I received an abrupt message that she had been moved to another foster home and that I should contact the social worker if I had any questions. For 2 days I tried to communicate with the social worker, to no avail.
This was in mid-December, and it was hard to be in the Christmas spirit when I was so worried about my kid. Why was she suddenly taken from one home to another, when everything seemed to be going fine?  Where was she, and more importantly, was she ok?
When the social worker did contact me, there wasn’t much of an explanation about what happened. However, I was given pertinent information about the new foster home, and my kid has settled into the new location, new school, and new family. This is her 3rd home since being removed from her biological parents. And though there have been some tears when the two of us have talked about the involuntary displacements, anxiety, and disappointment, she is amazingly resilient. My CASA child is 6 years old.

It is my hope that I’m making a difference in this little girl’s life.
I know for sure that after she has endured a lot of sadness, I, as her CASA advocate and friend, am making her happy.

At first, I merely thought that as a former teacher I might find a more personal way to do good in my community; working with one child at a time instead of the larger groups one works with in the classroom.  That is true, I feel like I make a real difference in the lives of the boys I have advocated for.

In each case (there have been three) I have learned important lessons from them, as cliché as that might sound.  In spite of the profound challenges facing each of the children they show resilience, positivity, and character. One boy was unrelentingly friendly. He waved at strangers when he caught their eye. They always waved back. The pair of brothers were easily the kindest and most polite children I have ever worked with. Ever. Currently, I have the honor of working with a child whose experiences would justify a miserable attitude about life and its cruelty. Yet he is often generous and thoughtful and enjoys much of life.

At my stage in life, gray and retired, one would think that there is little these children could demonstrate that I haven’t already seen. Not the case. They have shown me that life, for all its challenges is a great, sweet thing to be enjoyed and shared.

Another plus is that I get to participate in many activities that I would have if my own children would provide me with grandchildren. So that pressure is removed from them.

My experience as a CASA has been something I will cherish forever.

Many times when I tell people out in the community that I am a CASA and what I do as a CASA. I often get a response like, “You are a blessing or you are helping those kids out so much.” But really my response is, “No it goes beyond that, these kids help me out so much more than I think I help them!” Being a CASA makes me want to strive to be a better person, a better advocate, and a better role model for that child. I want to be a better sister, a better friend, a better mom, because often as a CASA those are the roles or the characteristics that we sometimes take on for these kids. Being a CASA helps me to be a better person.”

What is a success you have seen throughout your time as a CASA?

“The greatest achievements are not dramatic or sweeping; they are little moments that signify great leaps of trust, hope, and faith. When my very hesitant child finally confessed his fears about what will happen to him in foster care, it represented a great leap.”

“The emotional reward I receive from being a CASA is greater than any cost of time or money. It’s the moments when my CASA child lights up from the smallest things that make it all worth while.”

“Recently I have been in contact with a former CASA youth (who had been reunited with her family). I was touched that she reached out to me.”

What is a success you have been apart of since becoming a CASA?

“She was able to attend her 8th grade Washington DC/New York City trip with her class. She had never been on an airplane or had any travel experience. When we ( a collective team of people) told her she was able to attend this trip, she just cried with joyous tears. She had the best experience so far in her life, she tells people when they ask her about her trip.”

What is a success you have been a part of since becoming a CASA?

“I think her love for school and drive to do well in life right now is pretty amazing compared to a year ago. We have worked really hard to find the perfect school fit for her that she loves. A year ago, we could not have said that. She was so upset with her school setting that she had an elaborate plan to commit suicide. She really has grown a lot this year and is in a pretty good place with some rocky days.”

“I love the relationship I have built with my child. Being the eyes and ears to gain information about my child’s life for the court has allowed me to build this relationship. Knowing she trusts and confides in me gives me a sense of accomplishments in my role as a CASA.”